Housing and The Economy

The Covid-19 pandemic has challenged many industries. While there is some indication that the economy is strengthening in Q3 2021, the national economy still lags behind pre-pandemic levels. Gross Domestic Product (GDP) is 2.1% lower; unemployment 0.6% higher. Inflation remained low during the pandemic, with it reaching 0.5% in August 2020. However, the opening of the economy out of a successful vaccination programme and consequent lifting of lockdown restrictions contributed to the largest monthly increase in inflation since records began – a 2% increase from August to September. The Chancellor also announced that increases to inflation expected to average more than 4% for the next year but the economy is set to return to pre-Covid levels by the end of 2021.

The housing sector has certainly been impacted by the pandemic. Whilst demand for housing remained high, supply has not met this demand; with the construction sector’s output still being 1.8% lower than February 2020 levels. This has contributed to a sustained increase in house prices with the average UK house price rising by 8% from July 2020-21. The average house price is now £271,000 in England, £188,000 in Wales, £177,000 in Scotland and £153,000 in Northern Ireland, with the fastest growth in rental prices being in Scotland and the East Midlands and the lowest being in London.

The pandemic put homelessness higher on the political agenda. This is evidenced by the government introducing the ‘Everyone In’ initiative in March 2020. Everyone In sought to provide safe accommodation for homeless people or those where self-isolation would be difficult. Government also banned bailiff-enforced eviction in March 2020 to prevent new homelessness during lockdowns. A year later, the eviction ban was lifted on 31st May 2021 and by June 2021, the emergency funding for the ‘Everyone In’ scheme had been withdrawn. Homelessness charities are increasingly concerned for how this will impact vulnerable people, given that the homelessness levels have been rapidly increasing over the last decade and are calling for a long-term prevention strategy.

On 27th October the Chancellor announced the Autumn budget and spending review to Parliament. In his address, Rishi Sunak stated, ‘that this budget helps with the cost of living’ and ‘levels up to a higher wage, higher skill and higher productivity economy’ that is ‘fit for a new age of optimism’ post the Covid-19 pandemic.

There’s not a lot of new funding for housing, though.

While we are awaiting future details to be released, at a glance the key overall polices that housing associations, providers and developers should be aware of include:

A New Secretary of State tasked to tackle the cladding issue

While Michael Gove’s direction remains somewhat unclear so far, he has previously expressed support for social housing so there is some optimism in the sector. We do know is that levelling up is firmly on the agenda and the planning reforms led by Jenrick have been paused amidst significant sector pushback.

We also know the new Secretary is tasked to ‘solve the cladding crisis’.  Almost four years after the tragedy at Grenfell, the building safety crisis remains, and many homeowners and renters feel trapped in unsellable and dangerous homes as the result of sky-high remediation bills and the uncertainty of the Building Safety Bill.

The draft Building Safety Bill was published in July 2021 following the Hackitt Independent review. It sets out a new regulatory regime tasked to ensure the safety of residents. The new bill proposes changes for higher-risk buildings over 18m in height, which contain two or more residential units. A ‘golden thread’ of information is now required for new high-rise buildings, along with an accountable person within 12 to 18 months of the bill receiving royal assent for every high-rise.

Sustainable Housing – What does the Wave 1 decarbonisation fund actually mean for the sector?

Sustainable housing has been on the political agenda since the early 2000s, but the attention and action has increased recently due to factors such as the immediacy of the climate crisis, a net-zero target on greenhouse emissions by 2050 and the recognition of the role UK housing plays in decarbonisation efforts.

Homes account for nearly 15% of the UK’s carbon emissions and 30% of the country’s total energy use. Government recognises the importance of making homes more energy efficient, so a target has been set for all UK social housing to have at least a C rating on Energy Performance Certificates by 2035. Non-compliant providers risk a fine from local authorities of up to £30,000.

In August, Wave 1 of the Social Housing Decarbonisation Fund was announced following a pilot in March. This first of 4 waves of funding makes £160 million available for social housing providers to upgrade their stock to include more sustainable technologies and systems to reduce their environmental impact, whilst also making them easier to heat and cheaper to run through consequent savings on energy bills. Registered providers (RPs) will have to apply for the fund – the deadline for applications was 15th October and grants will be awarded in January 2022. The scheme will make £3.8 billion available in total over a 10 year period.

This move by Homes England represents a wider sector trend in which for-profit RPs and LAs are increasingly investing and building affordable housing.

For-profit RPs are a relatively new type of social housing provider and were permitted by the Housing and Regeneration Act 2008. Since then, private investment in affordable housing is growing significantly, with residential investment increasing in favourability with private equity firms. Although for-profit RPs only own 0.3% of all RP social homes, this has doubled in the last year from 5,342 to 9,313 homes as shown by the figure below. Growth is predominately attributed to an increase in provision of low-cost home ownership including shared ownership. While for-profits have been legally allowed to register as RPs since the Housing and Regeneration Act (2008), the number of providers is growing significantly now. 53 are currently registered and the Regulator of Social Housing (RSH) has said there is a considerable number seeking registration today. 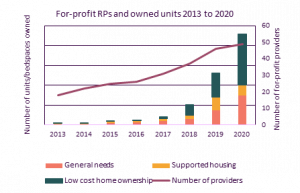 During the 1950s, during the height of LA building, LAs built on average 147,000 homes a year. Despite the declining rate ever since, there has been a revival in the role of LAs in homebuilding since early 2010s. Most notably are the changes to the way LAs can use Right to Buy receipts announced in March 2021, giving councils more power and flexibility to build more affordable suitable homes with the funds. 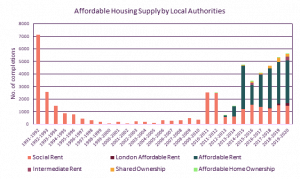 Is the government building back better? – Health, care, and support within the housing sector

The government’s new plan for health and social care –  Build Back Better – was published in September 2021 in which it doubled its funding commitment for the NHS to £2 billion for the remainder of this year. This has been introduced to tackle the backlog created by the Covid-19 pandemic. The plan also sets out a further £12 billion per year on average for health and social care provisions across the UK. From April 2022, these funds are coming from a 1.25% increase in National Insurance contributions from both employees, the self-employed and employers alongside a 1.25% increase in dividend tax rates.

A cap of £86,000 is being introduced from October 2023 to cover lifetime personal care costs (after that, LAs are responsible for care costs).​ And anyone with assets of less than £20,000 will not have to make any contribution for their care from their savings or the value of their home​.

The National Disability Strategy was also published on 28th July 2021, setting out a long-term ambition to support independent living for disabled people. It puts pressure on the government to deliver accessible affordable housing.

These announcements come alongside the publication of the Health and Care Bill in July which proposes legislative changes to join up healthcare services to promote better care. This will be debated in Parliament during Autumn and Winter 2021 and is consequently expected to come into force in April 2022. It will inevitably exemplify how health, care, and support remain pertinent challenges that the affordable housing sector leaders should continue to consider.

Daniel Hewitt’s ITV social housing investigation has contributed to a greater public focus on the sector and its treatment of tenants. Moreover, culture within the housing sector and the importance of customer voice were topics at the forefront of the 2021 CIH Housing. This all happens while the RSH works to develop new consumer regulation and standards.

At the CIH conference, Fiona MacGregor Chief Executive said the RSH was working towards the redesign of a revised consumer regulation framework which will cover three broad areas:

And at the CIH conference, Fiona MacGregor announced a change to the RSH approach to consumer standards where the three R’s are crucial – Repair, Redress and Respect to build/rebuild trust and transparency with tenants.

The Regulator is upskilling to deliver these changes. Kate Dodsworth, former Chief Executive of Gateway Housing, was recently appointed as new Director of Consumer Regulation. And three new board members focusing on consumer standards have also been appointed.

Although these changes will take a few years to put into regulation and effect – the message from the RSH is clear. Landlords must not wait, they must act now ensuring tenants are heard, issues are dealt with promptly and be transparent about complexities, pressures, and delay or when things go wrong.

Written by Kate Perham-Marchant and Rebecca How, Graduates at Altair.